First it was DoorDash Inc. And now it’s Airbnb Inc. In a 24-hour period, the two startups went public and their valuations skyrocketed, a sign that both companies could have raised a lot more money than they did.

Airbnb opened 115% above its initial public offering price, the biggest debut rally on record for a large U.S. listing. Had the shares priced closer to where they started trading — at $146 instead of $68 apiece — Airbnb could have raised $4 billion more for the company and early investors.

That gap is known as money left on the table, and is at the center of a years-long debate about how to price an IPO.

Getting pricing right on an IPO can be complicated. While a big rally can leave investors wondering why shares weren’t priced higher, if the stock doesn’t pop — or worse if it falls — companies can be viewed as failures for not attracting investors. The tradition of an IPO pop is designed to attract investors who are taking a risk on buying new stock that’s never been public.

Morgan Stanley and Goldman Sachs Group Inc. were lead advisers to Airbnb, responsible for deciding, along with the company’s executives, where the stock should price. When the parties convened on their Wednesday evening call to discuss that number, the performance of DoorDash — which had just soared 86% in its debut — was on their minds, according to people familiar with the matter.

That debut rallies that rank among the biggest-ever happened within hours of each other points to the enthusiasm around IPOs this year — especially those by well-known technology companies. Of the top 10 U.S. trading debuts on record for companies that raised more than $1 billion, five were logged by businesses that went public this year, according to data compiled by Bloomberg. 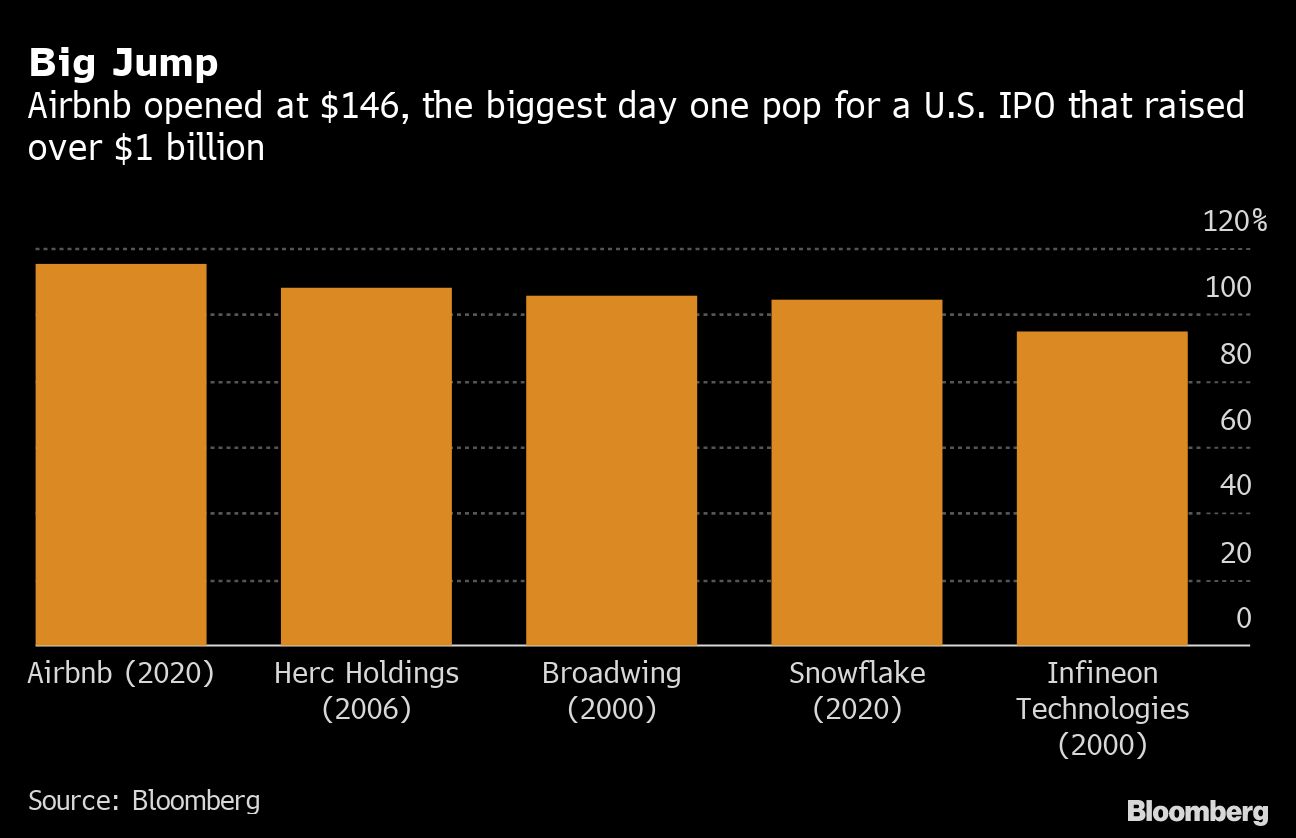 “We haven’t seen this level of IPO pricing variability in a long time, perhaps since 1999 and 2000,” said Notre Dame Law School associate professor Patrick Corrigan, who specializes in IPOs and venture capital.

The reason for the extreme pops this week is a mix of advisers finding demand from retail investors hard to measure, and scarcity of shares available to buy on trading day, people familiar with Airbnb and DoorDash’s IPOs said this week.

Retail investors drove a lot of the early activity around Airbnb, according to people familiar with the matter, sending the price up as they hustled to get a slice of the trading. In the hours before Airbnb started trading, there was an influx of small, likely retail orders, with eight to nine buyers for every seller, the people said.

Apps such as Robinhood, which have increased in popularity the past few years, allow individual investors to buy a fraction of a single share, lowering the barrier to entry.

“It seems like a stretch to say that fractional share programs arriving at major retail brokerages and IPOs going stratospheric at the open is just a coincidence,” said Max Gokhman, head of asset allocation at Pacific Life Fund Advisors.

Still, the extent of the day-one pop seems to have shocked even those closest to the companies. Airbnb Chief Executive Officer Brian Chesky said he was “lost for words” and “humbled” in an interview with Bloomberg Television when he heard about the high pricing indications before trading started.

DoorDash Chief Executive Officer Tony Xu, meanwhile, acknowledged DoorDash didn’t choose the highest price possible for its IPO. “We priced our stock where we did not take every last dollar off the table but where we feel like it is a true reflection of our fundamentals,” he told Reuters.

Scarcity played a major role in the rallies. DoorDash sold only about 10% of its shares, making supply hard to come by on Wednesday. Shares slipped slightly on Thursday, closing down 1.9% but still ending the day at $184.50, way above its $102 IPO price. Airbnb sold even less of its stock, only about 8% of its shares, a filing showed.

Like most other IPOs, DoorDash’s early employees and other shareholders are prohibited from selling their stocks until the so-called lockup period ends, usually several months after the IPO. But many current and former Airbnb employees were able to sell up to 15% of their shares on day one, according to its prospectus.

Bankers in both IPOs used a new system aimed at giving them more information to gauge investor demand. The technology, whose aim is to modernize the IPO process, is supposed to appeal to high-growth companies that can be subject to wide differences in valuation.

Prospective IPO investors fill in orders via an online portal, instead of with a sales person, indicating their level of interest at any desired price.

The software is only used for the initial allocation to institutional investors, so it doesn’t take into account demand from retail buyers. Some institutions that bought into the IPO held onto shares that were wanted by those retail investors, according to Jay Heller, head of capital markets & IPO execution at Nasdaq, home to Airbnb’s IPO.

“You get a consumer technology brand so well-known that people can understand who they are and what they do,” Heller said. “Retail wants to own these stocks and are willing to pay for it.”