Survey On the Home Ownership Campaign

Elisa longs for a home of her own. The thirty-year-old lives with her parents and is saving up to buy a property. Her main obstacle is coming up with the initial outlay. “Properties these days are quite expensive and there are other expenses such as the stamp duty charges. But now that the Home Ownership Campaign (HOC) is back, I may move forward with my plans to buy a house, as the incentives are quite attractive,” she says.

The reintroduction of the HOC is part of the RM35 billion Pelan Jana Semula Ekonomi Negara (Penjana), a short-term economic stimulus plan announced by Prime Minister Tan Sri Muhyiddin Yassin on June 5. The campaign, which applies to properties on the primary residential market, started in June and will end on May 31, 2021.

The incentives offered during the HOC include RM1 million in stamp duty exemption on the instruments of transfer for the purchase of properties priced from RM300,000 to RM2.5 million. In addition, there is 100% stamp duty exemption for the financing agreement, which is applicable for sale and purchase agreements signed between June 1, 2020 and May 31, 2021, for properties that include a minimum 10% discount by the developer.

With these incentives in place, will more people be buying houses? City & Country conducted a two-week survey to find out and 490 responded (see infographic).

The respondents were categorised into three age groups, with the largest between the ages of 23 and 35 (52.4%).

When asked on their purpose for buying a property, 59.2% of respondents answered that it was for their own stay. The majority (169 respondents) were from the 23-to-35 age group, with 112 being first-time homebuyers.

While about 85.8% of the respondents were happy with the reintroduction of the HOC (218 respondents from the 23-to-35 age group), only 54.1% would be buying a property during the campaign period. 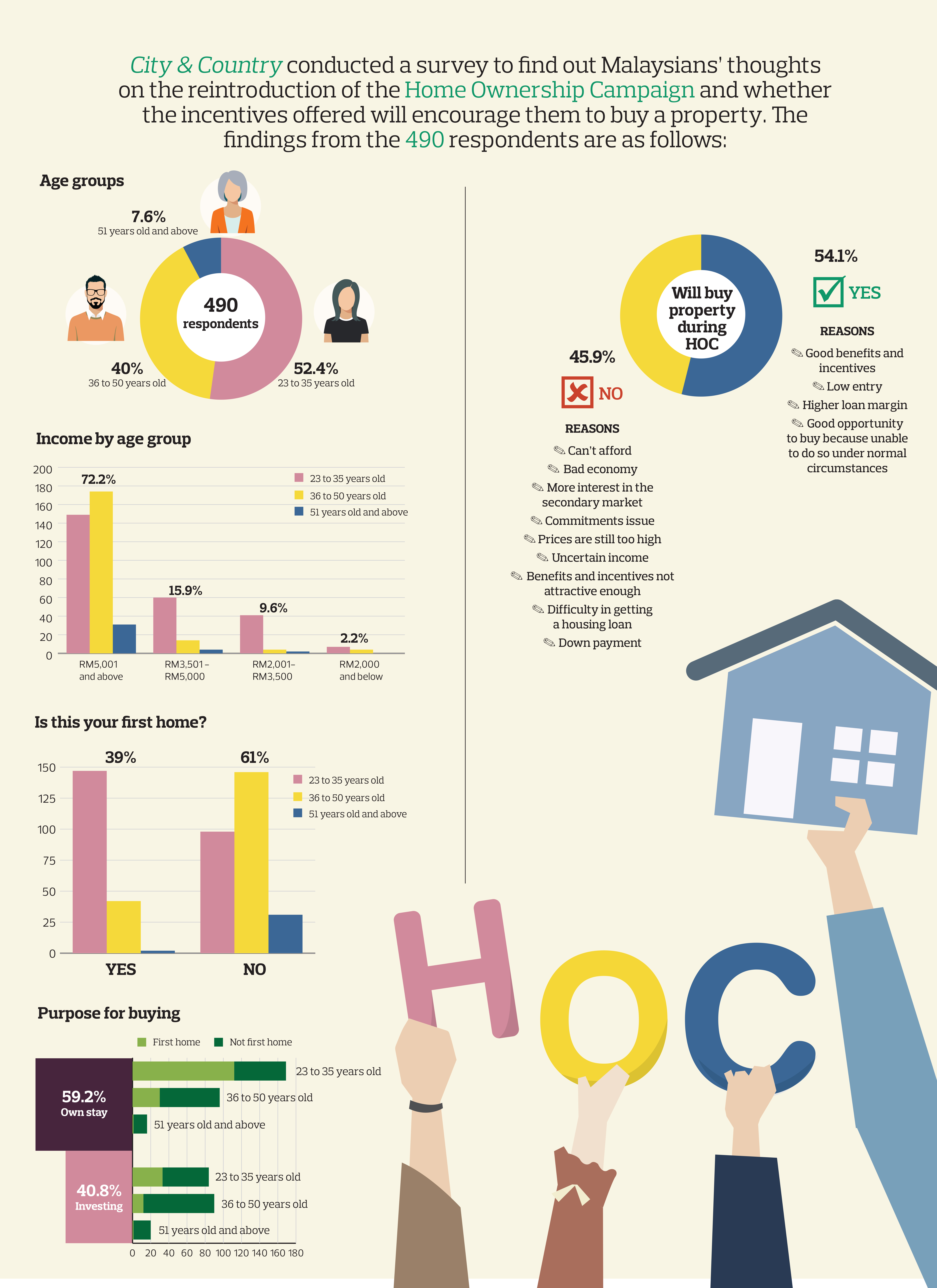 The main reason given by those willing to buy a property during the HOC period was that the benefits and incentives given were good. They felt that the low entry barrier and higher loan margin provided a good opportunity to buy now as they would be unable to do so in normal circumstances.

On the flip side, those who said they would not be buying a property cited various reasons, including affordability, economic situation, job stability, commitments and high prices. Some said they were more interested in the secondary market while others said the incentives were not sufficiently attractive.

The main obstacles to buying a property given by the respondents were similar to the reasons stated by those not buying a property during the HOC period, with the addition of the difficulty in getting a housing loan and coming up with the 10% down payment.

The survey provided many insights into the expectations and inclinations of property buyers, especially the younger set. As for property experts, they are of the view that the reintroduction of the HOC is timely and necessary as it helps to spur transactions in the property market.

“The HOC will be well received in a low interest rate environment, as it accelerates or incentivises the purchasing decision of aspiring homebuyers,” says CBRE|WTW managing director Foo Gee Jen.

Incentives offered during this year’s campaign are quite similar to last year’s offerings.

“The main improvement in this year’s campaign is the full stamp duty exemption on loan agreements. Buyers will be able to enjoy additional savings if their loan amount is less than RM2.5 million,” says Savills Malaysia managing director and head Datuk Paul Khong.

However, while the HOC is welcomed and the incentives given are similar, Rahim & Co director of research Sulaiman Akhmady Mohd Saheh says it will be challenging to replicate the success of last year’s campaign.

“HOC 2020 is implemented under different market conditions compared with last year’s, especially with the ongoing Covid-19 pandemic where a [viable] vaccine is yet to be found, the restrictive movements disrupting the economy and the unemployment and income security concerns. Furthermore, the challenges are more global in nature, cutting across various markets and sectors,” he says.

He adds that the incentives introduced do ease the financial barrier to buying a home but do not eliminate it. Money is still needed to pay the down payment, get a facility to cover the loan amount required and service the loan. And the perpetual issue of high house prices that are beyond the reach of the majority is still there.

Sulaiman says a “systemic change that is more comprehensive and long term in nature” is required to help the industry.

Foo opines that the incentives given are good but can be better. He says there should be a quick release mechanism of unsold bumiputera units without charging a levy.

“On the one hand, holding costs are an additional burden for developers during this difficult time and compromises on stock liquidity with a risk of further plaguing the property market [with oversupply]. On the other hand, a waiver of the levy, which ranges from 5% to 15% in different states, will essentially translate into the 10% discount obligated under the HOC; thus the saving on levy is transferred directly into the pocket of buyers,” he explains.

Meanwhile, Khong opines that the government should consider incentives for commercial shoplots and ready-built industrial properties for owner-occupation purposes, especially for small and medium enterprises (SMEs). 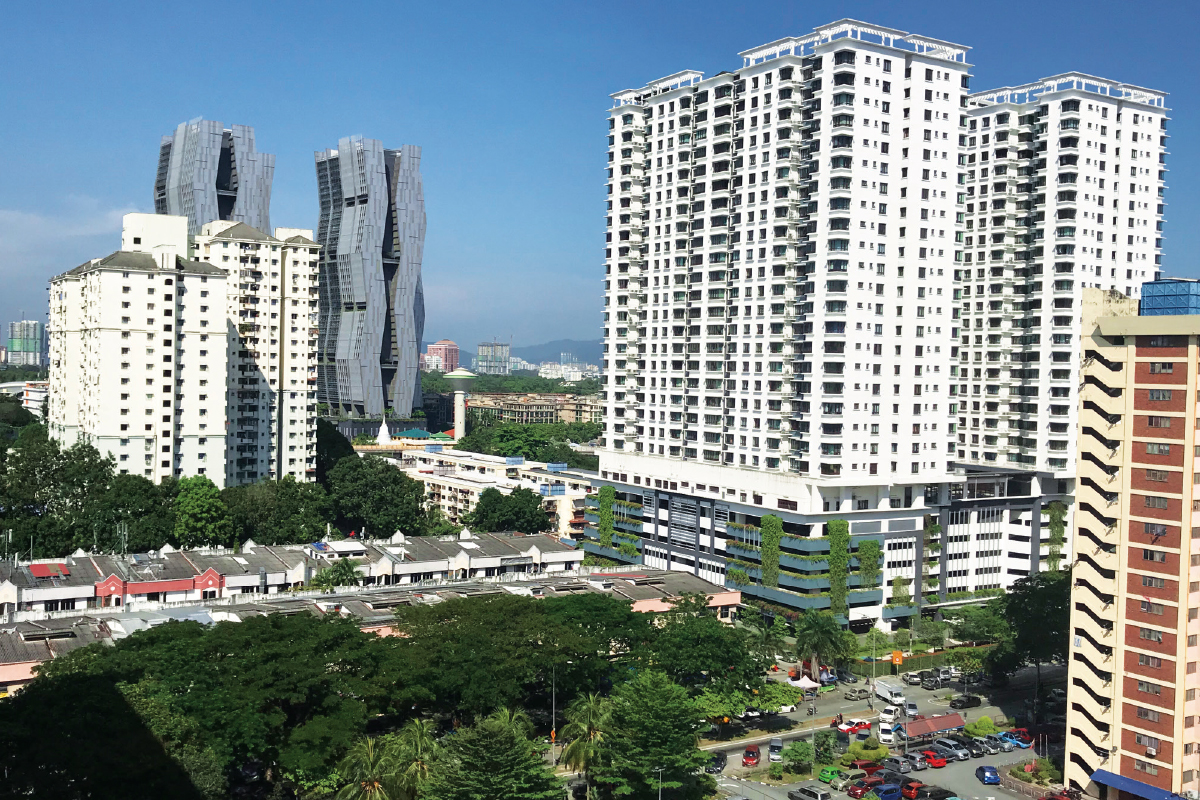 Property experts believe that the HOC incentives should be extended to the secondary market, especially if there are no new housing schemes in a state (Photo by Ethel Khoo/The Edge)

HOC incentives for the secondary market

The incentives offered during the HOC should be extended to the secondary market, especially if there are no new housing schemes in a state, says Savills’ Khong.

The secondary market dominated the residential market last year in terms of the number of transactions (82%) and total transaction value (79%), he adds.

As coming up with the 10% down payment to buy a sub-sale property is one of the main challenges for buyers, CBRE|WTW’s Foo says the extension of the HOC to the secondary market would help ease the initial capital commitment of buyers in this segment.

“Withdrawal permission from pension funds for house purchases is another relief to the upfront cost of sub-sale purchasers,” he adds.

He notes that buyers in the secondary market also face uncertainty in loan coverage as there is a possibility of devaluation by banks and this in turn increases the capital outlay of buyers.

“Reciprocal to the uplift of the loan-to-value (LTV) ratio, banks could grant higher loan margins to buyers of properties on the secondary market with good credit score,” says Foo.

Khong concurs, saying that there is a disparity between a bank’s valuation of a property and the final agreed price between buyer and seller. “Banks should allow eligible first-time homebuyers a higher LTV ratio for homes purchased on the secondary market.”

He adds that for a secondary market purchase, a reduction in stamp duty for instruments of transfer — even at 50% — or some sort of instalment plan for stamp duty payable will be helpful.

Rahim & Co’s Sulaiman says to reduce the down payment, the most direct approach would be to lower the house price. Another approach is to increase the LTV ratio.

“However, one consequence of the latter is the increase in the amount of loan needed to fund the purchase and this would be a risky move, especially from the financial institution’s perspective,” he says.

In the past, the government had announced two incentives to help mitigate the down payment hurdle — Skim Rumah Pertamaku and Skim MyDeposit.

The former was announced in Budget 2011 and the latter in 2016 by the Ministry of Housing and Local Government. “Not much has been said about the success of those schemes,” says Sulaiman.

The most recent solution to the down payment issue faced by potential buyers is the rent-to-own (RTO) scheme, which is gaining ground as the new way to afford a house.

“The RTO scheme seems to be the more sustainable approach to easing the down payment burden without sacrificing financial security. But it would depend on the attractiveness of the rent amount that is to be paid,” says Sulaiman.

Foo says now is the right time to step up the RTO scheme and financial institutions and developers should collaborate to expand the product choices on such platforms.

The scheme lowers the barriers to entry for house purchases and is feasible for prospective buyers who need immediate access to housing but require time to build up their financial capacity, he explains.

“RTO allows buyers to avoid interest-servicing and commit the rental on their own readily occupiable prospective house. It also provides certainty to buyers whereby they are able to try out the living condition of their prospective house before acquiring it,” says Foo.

Sulaiman concurs. He says, “Successful applicants enjoy the benefit of living in a home of their choice without having to pay the down payment or even commit to buying a home yet. Instead, monthly rent payments are made to the bank that are partly taken as the down payment for the home intended for up to five years. In between, the applicants can convert the renting phase into the actual purchase of the home at the price that has been set at the beginning of the scheme.”

Buyers who sign on to the RTO scheme during the HOC period should be entitled to the same incentives upon their transaction on the agreed future date, Sulaiman says. Maybank HouzKEY was one of the first RTO schemes offered by a financial institution to the public and so far, it has been the benchmark for similar programmes, he notes.

While this flexible homeownership scheme is for both primary and secondary market purchases, Savills’ Khong says buyers should still do their homework. “This [RTO scheme] is an alternative financing option for homebuyers if they do not wish to opt for the conventional mortgage and it offers a hassle-free exit plan for those who do not intend to own a property for long. However, homebuyers should do their homework to evaluate all available financing schemes before making a decision.”

Getting approval for a mortgage

One of the obstacles to buying a house that survey respondents mentioned was getting their housing loan application approved. Sulaiman believes the stringent approach the banks take in giving out housing loans is necessary to prevent a “sub-prime” situation from happening — loans being given to individuals with a low credit score and that are at a high risk of becoming impaired or non-performing.

Hence, for buyers, the rule of thumb is to “buy within your means” to stand a better chance of obtaining a loan and to avoid over-leveraging induced by false optimism or moral hazard, says Foo.

On the macro front, he says the government’s stimulus packages are directed at keeping the economy rolling and to stabilise the labour market.

“Bank Negara Malaysia has been responsive with measures such as the [loan] moratorium to mitigate default risk and interest rate cuts to provide liquidity to businesses and market,” he notes.

Sulaiman observes that one of the common reasons for an individual’s failing to get a mortgage approved is having too many current commitments, an unstable income flow or simply lacking the funds to afford the down payment required.

“So, one way to increase one’s chances of getting their loan application approved is to have fewer commitments at the time of buying a house and have enough savings to afford the entry cost of the purchase. This relates to a better grasp of financial literacy, management and discipline,” he says.

An example he gives is to reduce the number of credit cards held by a housing loan applicant. “It is usually taken as a factor in determining one’s debt servicing capability, despite a low or zero outstanding balance amount,” he says.

While the incentives may make buying and owning one’s first home possible, property experts says doing one’s homework and due diligence, as well as knowing your financial standing, is vital when buying a house, especially during these challenging times.