First-time equity investments in startups continued a downward trajectory this year, with the capital in Q3 representing 5.5% of the total US VC deal value, according to PitchBook data. That figure is a slight dip from Q2, when so-called first financings captured 5.7% of total venture investments.

Follow-on financings, however, have crossed the $30 billion mark in every quarter this year.

Founders and investors have been adjusting to a new normal in 2020: conducting business virtually. Many investors have used online networking platforms, webinars and video calls to help them connect with entrepreneurs and sign deals. But founders have still had difficulty attracting new backers. They have also had to contend with more risk-averse investors carefully managing their funds.

“We have seen some VCs become more conservative and only invest in founders in their networks or founders who they have met in person,” said Maren Bannon, general partner at January Ventures. 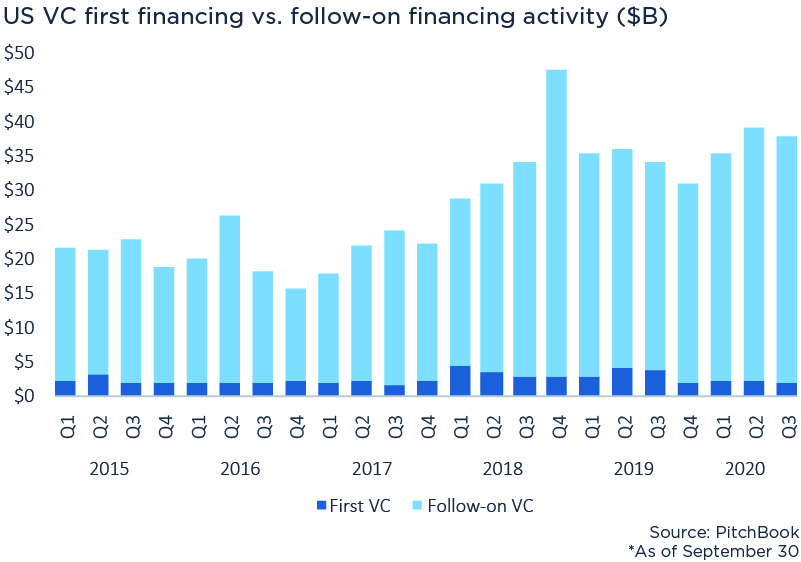 In the third quarter, venture capitalists completed nearly $2.1 billion in first-time funding rounds in the US. That was a 47% drop from a year ago, when founders received $3.9 billion, or 11.5% of total VC deal value.

Immad Akhund, founder and CEO of Mercury, a banking startup catering to early-stage companies, said that from April to June, he saw a large slowdown in investing toward new companies across the venture ecosystem.

“Investors were previously relying on in-person meetings to get a subjective read on a person,” he said. “But from July onwards, emerging seed fund managers with smaller and rolling funds adapted more quickly to the remote normal.”

To help bridge the virtual divide, Akhund launched a networking platform in September to connect founders with angels and other early-stage investors.

But the apparent virtual barrier wasn’t the only issue influencing investor decisions.

“Because investors were meeting and backing companies virtually for the first time, and hearing about short-term liquidity concerns from a portion of their LP base, [they] sought lower risk opportunities,” said Joe Kaiser, director of Mercato Partners‘ Traverse Fund.

Kaiser said the pandemic-driven economic slowdown upended traditional venture fundraising, as many startups turned to stabilizing their operations and expenses.

Yet not all entrepreneurs have had a difficult time fundraising from new investors.

Alex Bouaziz, co-founder and CEO of Deel, said that over the past five months, his company raised $48 million in two rounds entirely over Zoom. Based in San Francisco, Deel operates a payroll and compliance platform designed for remote teams.

“One of our investors initiated outreach over DM on Twitter,” Bouaziz said. “So yes, it is an unusual time for first financings, but investors were definitely comfortable funding teams they have never met in person.”