It was probably a nail-biting wait for the release of Genting Bhd and its subsidiary, Genting Malaysia Bhd (GENM)’s, financial result for the second quarter ended June 30 given that the Genting group’s casinos were unprecedentedly shut for more than two months globally due to COVID-19.

Both companies announced sharp losses. However, Genting group’s boss Tan Sri Lim Kok Thay has given the minority shareholders a pleasant surprise — dividends. They will be receiving the same amount of dividends as they did last year despite the current economic uncertainties. 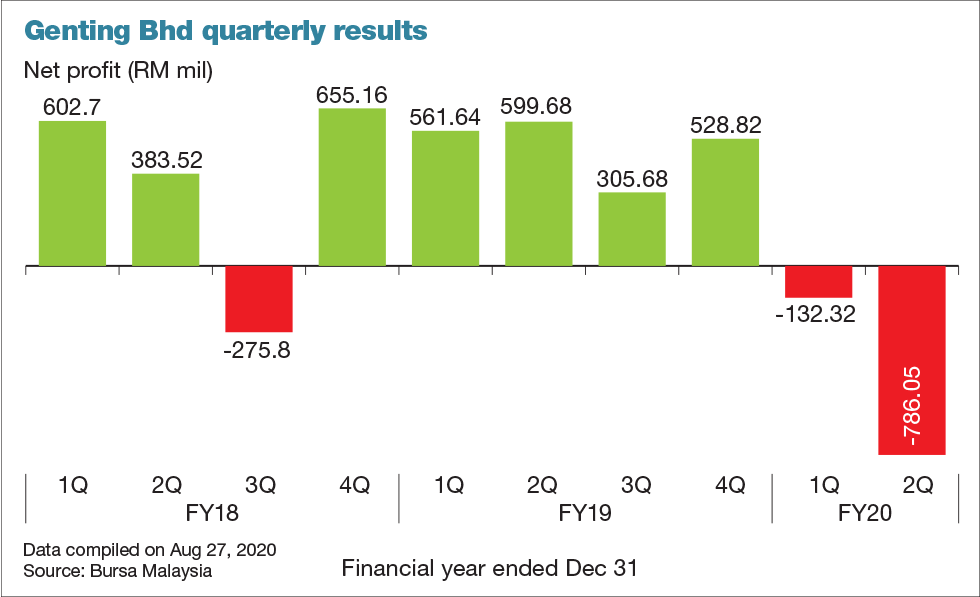 Still, the hilltop casino operator has declared an interim dividend of six sen per share.

Being the majority shareholder, Lim will have the biggest dividend cheque. On the back of envelope calculation, the tycoon, who hogged the limelight recently as Genting Hong Kong Ltd (GEN HK) had to temporarily suspend payments to creditors, is expected to receive RM107.64 million via his investment vehicle Kien Huat Realty Sdn Bhd.

GEN HK started to meet its creditors this week to restructure its debts as the cruise operator suffers from tight cash flow as its operation has been suspended due to the COVID-19 pandemic. It has yet to resume full operation.

Collectively, Lim, who is the chairman and chief executive of both Genting and GENM, is estimated to be getting RM113.56 million from both the companies.

Should the duo maintain their dividend payout as last year, the two companies would be getting attractive in terms of dividend yield.

More so in the present low interest rate environment. Furthermore, the sharp drop of the share prices has boosted the yield as well.

A back-of-the-envelope calculation, assuming GENM declares a final dividend of six sen per share in the second half of FY20, the casino operator will be offering a dividend yield of 5.38% based on the closing price of RM2.23. This is in comparison to last year’s yield of 3.91% — based on its share price a year ago of RM3.07.

Likewise, at the closing price of RM3.54, Genting’s dividend yield would come at about 3.67%, if the flagship company also declares a final dividend of 6.5 sen per share. This is in comparison to a yield of 2.2% a year ago at the share price of RM5.92.

The two stocks are trading at their 11-year low if we disregard the troughs in mid-March.

GENM’s share price is still down by almost 30%, while Genting is 40% down year to date.