Investment volume Expected To Rise In 2021

Almost a year after the start of the Covid-19 pandemic, some 60% of investors have indicated their intention to buy more property in 2021, the highest level since 2016, according to CBRE’s Asia Pacific Investor Intentions Survey 2021.

“The recent commencement of vaccination programmes in several countries around the world has further boosted market confidence. Together with an increase in asset availability resulting from disposals by developers and real estate funds, this has led us to forecast a 5% to 10% year-on-year rise in investment volume in 2021,” says CBRE.

The survey was conducted between Nov 9 and Dec 14, 2020, with the participation of 492, mainly Asia-Pacific-based, investors. Most investor types such as high-net-worth individuals, real estate investment trusts (REITs) and institutional investors have shown stronger buying intentions for 2021 than last year, it adds.

“Boosted by the upbeat fundraising environment, which has seen US$59 billion worth of equity raised by Asia-Pacific-focused closed-end real estate funds between 2018 and 2020, real estate funds will continue to deploy capital,” says CBRE. “While most investors types have strong buying intentions, this year’s survey found a greater willingness among selected investors — including developers and real estate funds — to sell.”

“With numerous closed-end real estate funds due to expire in 2021/22, many entities will be looking to sell as fund managers review portfolios and exit positions. Fund managers will also ride the wave of improving market sentiment to build a track record for the next round of capital raising,” it adds. 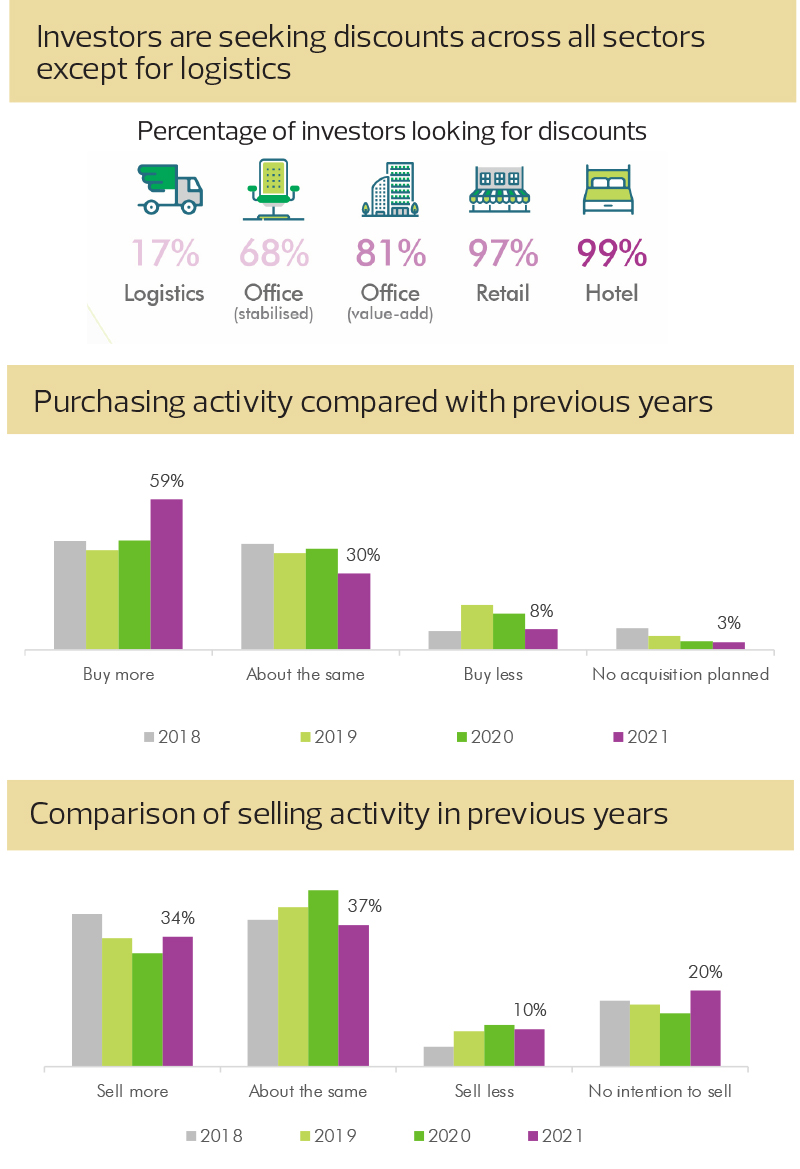 Despite ongoing travel restrictions, more than 70% of respondents intend to purchase assets overseas this year. According to CBRE, more investors have identified markets in Asia as their preferred choice for investment, thanks to the region’s better containment of Covid-19. This is aided by the fact that most respondents are more familiar with Asia’s markets and dynamics.

“Despite North America’s ranking as only the third most popular region for cross-border investment, South Korean and Japanese investors retain a strong appetite for US real estate as they look to assemble international real estate portfolios. The weaker US dollar, which has driven down hedging costs, has also spurred interest,” says CBRE.

Meanwhile, Tokyo remains the most attractive city for cross-border investment in 2021. The city has placed in the top three since 2018, owing to its availability of high-quality assets and strong liquidity.

CBRE notes that there has been an increase in interest in Singapore, which ranked second. “Although CBD office rents declined in 2020, rents are forecast to register growth over the next three years, supported by low vacancy and strong demand. The city state remains an important hub for foreign corporations looking to access Southeast Asia and is also emerging as a viable alternative to Hong Kong among companies establishing their Asia-Pacific headquarters.”

Ranked No 3 for the first time is Seoul, boosted by South Korea’s robust domestic investment market and with local and foreign buyers retaining a strong appetite for modern logistic properties in Greater Seoul.

Scoring another first is Ho Chi Minh City. It took the fifth spot, driven by the diversification of supply chains, which encourages more manufacturing investment and with industrial and logistics assets keenly sought after.

“While Hong Kong fell out of the top 10, selected foreign buyers increasingly view the city as an opportunistic play following a recent price correction. Meanwhile, Australian cities are less popular than they were last year, owing to an increase in office space for sublease and a large supply pipeline, which may limit office rental growth in the short term,” says CBRE.

For the first time, the logistics sector was named the most popular choice for investment. CBRE says robust demand for logistics assets is reflected in investors’ pricing expectations, with 23% — mainly long-term institutional buyers — willing to bid above asking prices. 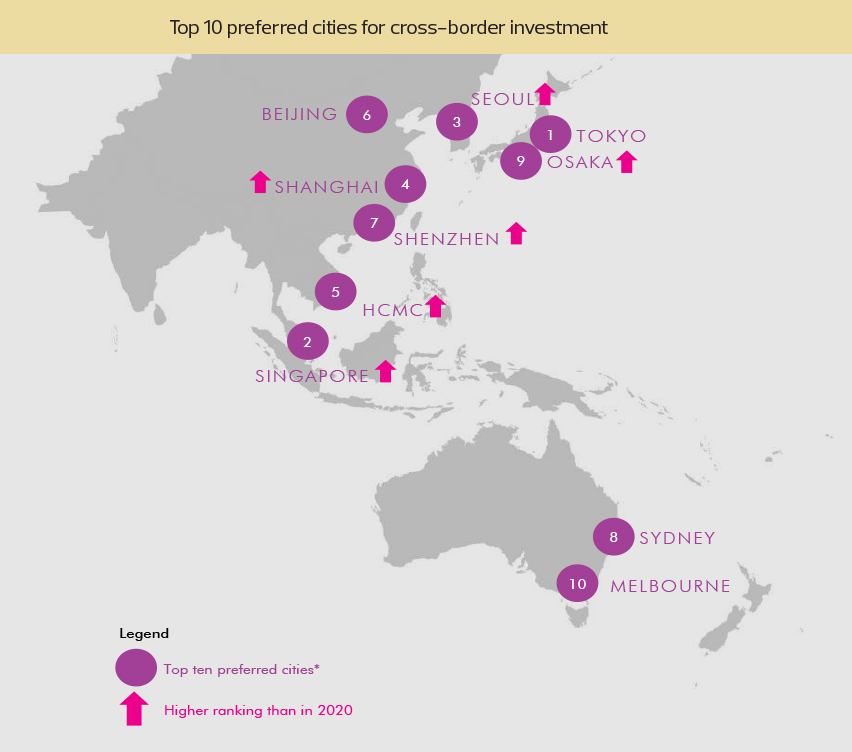 The real estate company believes there is room for further logistics yield compression this year. It attributes weakening interest in the office sector to uncertainty on the outlook for future demand.

“Investors therefore expect sizeable discounts for office properties. Expectations for discounts for stabilised offices are diverse, with half of investors seeking discounts of up to 10%,” says CBRE.

The retail and hotel sectors still see weak demand, and investors who are interested would require significant discounts. “However, selected opportunistic investors are considering hotels as counter-cyclical plays, particularly in countries with strong domestic tourist markets such as Australia and Japan. Investors are also seeking distressed-hotel opportunities in the latter,” says CBRE.

Data centres and cold storage were named the most popular choices in the alternatives sector. The surge in demand for video conferencing and other platforms to support remote working has increased requirements for data storage. According to CBRE, transaction volume in the sector reached US$2 billion (RM8.1 billion) in 2020, the highest annual total in five years.

Cold storage was the second most popular sector. The demand for this increased substantially in 2020, owing to growing requirements from occupiers selling groceries and pharmaceutical products. 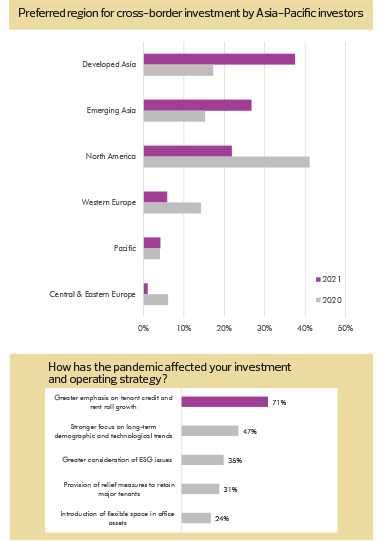 As for the office sector, CBRE says that while the increasing adoption of remote working is set to have a negative impact on long-term global demand, it expects the impact in Asia-Pacific to be relatively mild. Most respondents expect office demand to decline by up to 10%, while some investors — especially insurance companies — believe office demand will increase.

These findings are largely consistent with CBRE Asia-Pacific’s most recent office-occupier survey, in which a quarter of the respondents said they planned to slightly reduce their office portfolios over the next three to five years, whereas more than 20% intend to increase office space.

“While office demand is not expected to contract significantly over the course of 2021, rents will remain under pressure this year. With business activity in many markets continuing to be disrupted by measures to contain the pandemic, many investors expect tenants to request rental reductions or more incentives for new leases, including fit-out subsidies and longer rent-free periods,” says CBRE.

The real estate company expects Grade-A office net effective rents to remain under downward pressure in 2021, albeit at a milder rate than in 2020. “As the cumulative change in rents since 2018 (assuming a three-year lease) is still larger than the correction, particularly in North Asia, investors can still achieve higher reversal rents upon renewal,” it says.

The survey also revealed higher inclusion of environmental, social and corporate governance (ESG) criteria in investments. “The increase in adoption is being driven by regulatory and tenant requirements. More institutional investors, especially European-based groups, now possess required mandates to purchase assets with ESG certification or to commit capital to funds that invest in such assets,” says CBRE.

“Energy efficiency remains a key consideration while health and wellness is now a key focus as the pandemic has created greater awareness of the importance of proper ventilation.”