Oil And Gas In The New Norm

SINCE the collapse of crude oil prices in 2014, the oil and gas (O&G) sector has never been the same.

First came the shale boom in the United States, creating ample supply and potentially changing geopolitics in the process by making the country less reliant on oil imports.

Another sting to the industry was the heavy debts that players struggled to pay back following the oil price rout that took place from 2014 to 2016.

And last year, the Covid-19 pandemic all but crushed whatever recovery hope that remained in the oil market. Crude oil prices swung wildly. In April, US crude oil prices fell below zero for the first time in history. That was when the price for the West Texas Intermediate (WTI), the benchmark of the US oil industry, fell from US$17.85 per barrel to minus US$37.63 in just one day.

This was due to “severe oversupply” and barely enough demand with the Covid-19-driven lockdowns halting activities. 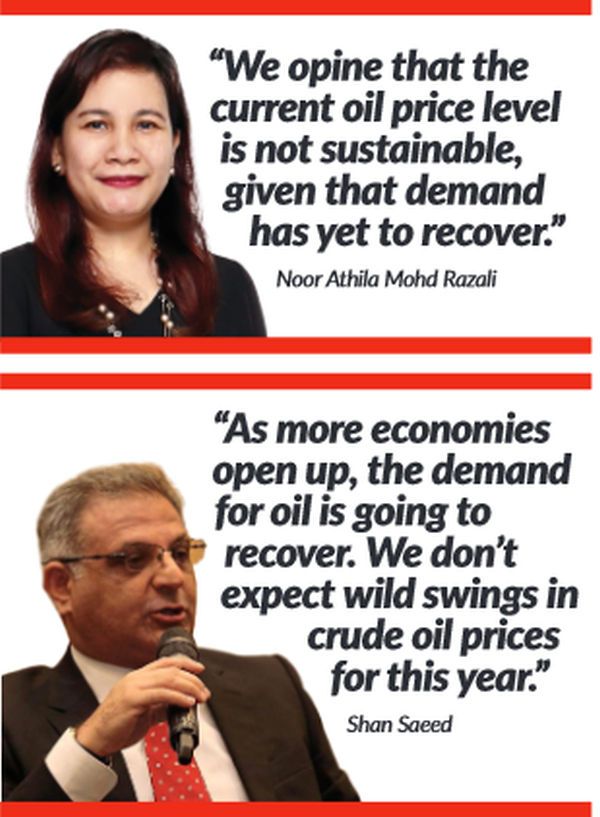 The price of the international benchmark Brent crude, which is more related to Malaysia, touched US$15.98 per barrel, the lowest since June 1999.

While crude oil prices have recovered from those lows, with Brent crude recently touching US$54 per barrel, the sustainability of its price remains a concern.

On a positive note, some analysts and experts reckon that the Covid-19 vaccines will be the theme that will shape the recovery of the oil market in 2021, as economies emerge from the pandemic.

However, some experts warn that oversupply concerns would continue to be a drag on the recovery of the sector – they don’t think that crude oil prices could rise to US$60 per barrel.

“We opine that the current oil price level is not sustainable, given that demand has yet to recover as countries across the globe fight the unsettling Covid-19 pandemic.

She points out that the recent surge in crude oil prices was mainly driven by the official announcement on US president-elect Joe Biden being certified as the next president of the US, coupled with the announcement by Saudi Arabia to further cut its production by one million barrels a day.

Nevertheless, despite the uncertainty in the macro-environment led by Covid-19, Athila expects that 2021 would not see the wild swings in oil prices that had happened in 2020.

She is predicting a gradual recovery in the O&G sector, with something “more significant” to take place in the second half of the year. That positive change, she says, will be driven by an effective containment of the Covid-19 pandemic worldwide, led by the successful rollout of the vaccines globally.

“These factors will help alleviate the demand concern, as they will ensure economic activities continue to run and hopefully recover to pre-Covid-19 levels.” Weakness in the

US dollar is a boon

Interestingly, crude oil prices could touch US$70 per barrel if the US dollar continues to weaken. Juwai IQI chief economist Shan Saeed explains: “Crude oil prices are quoted in US dollars. When the value of the greenback drops, the price of crude oil will be higher in dollar terms, ” he tells StarBizWeek.

He says should the US dollar drop 20%, it will add US$10 per barrel to the price of crude oil. 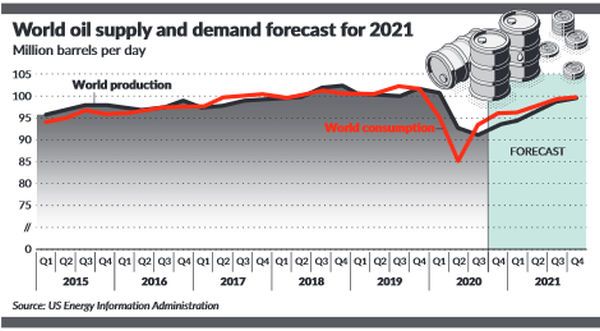 The US dollar index is an index of the value of the greenback relative to a basket of foreign currencies, often referred to as a basket of US trade partners’ currencies.

The US dollar has been losing steam since last year after the Federal Reserve took unprecedented action to limit the fallout led by the Covid-19 crisis.

According to a report by The Financial Times, Goldman Sachs analysts expect a 5% depreciation of the US dollar this year from its current level, while Bank of America expects the US dollar to fall a further 2% against the euro over the same period.

For crude oil prices, Juwai IQI’s Shan reckons that geo-economics and geopolitics will have a significant impact.

“As more economies open up, the demand for oil is going to recover. We don’t expect wild swings in the crude oil prices for this year, ” he adds.

Overall, Shan expects that crude oil will hover between US$50 and US$70 per barrel this year, driven by demand as well as the weakness in the US dollar.Oversupply concerns

Since 2014, the oil industry has been continuously impacted by oversupply caused by the shale oil boom in the US. But one reason why oil prices have been able to hold up is due to the production cuts agreed on by the Organisation of the Petroleum Exporting Countries (Opec), Russia and other allies (Opec+).

Last year, though, Saudi Arabia and Russia went into a price war at the peak of the Covid-19 pandemic, which sent crude oil prices reeling.

The pandemic has also impacted the US shale oil industry. Observers say though that as oil prices recover, so will shale oil production.

Kenanga Research says that while demand for crude oil is “almost certain” to recover going into 2021, there are uncertainties surrounding the supply side such as the sustainability of Opec+’s current production cuts.

The research house says that there could be a resurgence of shale oil production should oil prices go past US$55 per barrel, the level that is widely said to be shale oil’s breakeven price.

“We opine that sustained Opec production cuts at current levels are imperative to prolonging the current stability in oil prices, although we suspect this to be highly unlikely throughout the course of the year.

“The International Energy Agency or IEA had also reiterated a similar view that existing inventory overhang could linger until the end of the year if Opec turns on the tap, even without fresh surplus during the year, ” Kenanga says.

Kenanga has pegged the 2021 average Brent crude price at US$50 per barrel.

Meanwhile, Juwai IQI’s Shan reckons that the increase in shale oil production would only come back should crude oil prices go above US$60 per barrel.

“The shale oil producers have suffered a lot last year. Their breakeven point is between US$48 and US$54 per barrel, ” he says.

The uncertainties in the recovery of crude oil prices could see oil majors such as Petroliam Nasional Bhd (Petronas) continuing with efforts to cut or at best maintain spending.

Exxon Mobil has proposed to slash capital expenditure (capex) to between US$16bil and US$19bil, down from US$23bil in 2020.

British oil major BP Energy has reduced its 2021 capex plan to US$13bil-US$15bil from the US$15bil-US$17bil it had announced in the fourth quarter of 2019, while Anglo-Dutch Shell has said its investment would be around US$19bil-US$22bil compared to the US$25bil originally planned.

So, what’s in store for the many O&G service companies in Malaysia?

Athila of MIDF points out that according to the recently released Petronas Activity Outlook 2021-2023, offshore activities are expected to support local O&G service providers for this year.

“In particular, we are seeing an opportunity with the decommissioning of facilities and well abandonment segments in the next three years which would require involvement from various local O&G service providers, ” she says.

Shan expects that the oil majors’ capex for this year would remain “status quo” unless crude oil prices surge above US$65 per barrel. 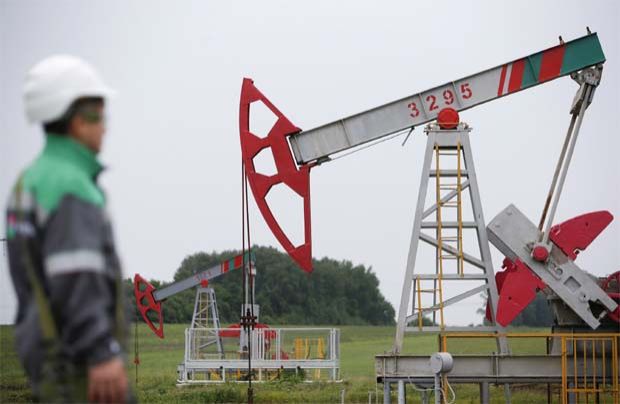 He points out that the liquefied natural gas (LNG) sector will gain traction in the coming years with an energy shift worldwide.

“This will be a boon for Petronas as LNG is more environmentally friendly and more countries are reducing coal consumption in energy production, ” he says.

However, Kenanga Research expects O&G activities in Malaysia to stagnate this year, with flattish or lower activity levels compared with last year.

“This somewhat downplays the possibility of a recovery to pre-pandemic activity levels during the year, amidst Petronas’ increased prudence in spending, given its dwindling net-cash position, coupled with increased tax and dividend commitments, ” it said in a report yesterday.

Referring to the Petronas Activity Outlook 2021-2023 report, Kenanga says while there is no clear winner, it expects that players in the brownfield sector would benefit from increased activities across various value-chains.

“Overall, while a recovery is expected to be underway, we believe this recovery trajectory will be slow and gradual.”

On the flip side, a recent report by the International Energy Forum and the Boston Consulting Group states that the world will lack production capacity to meet its projected needs if oil companies do not urgently replace depleted reserves and develop new fields.

The report points out that in 2020, O&G companies cut their capex by a combined 34%, slightly more than the initial 28% reduction following the price decline that started in 2014.

The report also estimates that reductions in capex spending today will have twice the effect of similar cuts made in 2014.

“This time around, suppliers have less scope to do that. As a result, the recovery in investments is likely to take longer than it did in the wake of the 2014 price drop.”

The O&G industry also continues to face its perennial chicken-and-egg problem. While an economic recovery will be a boon for business, improving oil prices would tend to encourage more production, which, in turn, will dampen oil prices again.

This can only mean that the oil market and its players continue to remain between a rock and a hard place.