XINJIANG has never left the radar of the United States and its allies in their relentless efforts in recent years to vilify Beijing. They have hurled accusations ranging from human rights violations to baseless claim of “genocide” against the Muslim minority groups.

The most recent blow, which has kicked up a huge international firestorm since March 24, centered on the alleged use of “forced labour” in the huge and vibrant cotton industry in Xinjiang.

Calling these accusations “malicious lies and fabrications”, Beijing has imposed tit-for-tat sanctions on politicians and groups in the US, Britain and the European Union (EU), in retaliation for Western sanctions on Chinese officials over their role in alleged human right violations in Xinjiang.

In its attempt to show the brain and culprits behind these allegations, Beijing has also said there are geopolitical and economic reasons in the conspiracy to “blacken” Xinjiang cotton.

Accusing the US of aiming to destabilise China, Beijing’s foreign ministry on March 26 showed the media a 2018 video that recorded a speech by career US army officer Lawrence Wilkerson, who told the US Central Intelligence Agency to use Uyghurs in Xinjiang to hit China from within.

Beijing has also highlighted the subtle link between US government and Geneva-based NGO Better Cotton Initiative (BCI), which has sanctioned Xinjiang cotton despite being informed by its Shanghai branch there are no signs of forced labour in Xinjiang in the latter’s own investigation.

The BCI, hitherto thought to be an independent trade group to promote better standards, is accused by China to have allegedly taken funding from US Agency for International Development (USAID).

According to USAID’s website, the work of the agency “advances the government’s national security and economic interest”.

The Chinese social media has taken this further. It points out that BCI council chairman Marc Lewkowitz is the president of Supima – the promotion and marketing organisation for American Pima cotton growers.

“The US has no right to accuse China over human rights. It’s time for some US politicians to end the drama they made up, directed and performed themselves, and it’s time for them to wake up from their own Truman Show, ” said Hua Chunying, China’s key foreign ministry spokesperson, at a regular press briefing last Wednesday.

As the history of Xinjiang is marred with bloody terrorism and separatism, which was only put to an end by the central government in 2016, the province populated with 12 million Muslim Uyghurs has become an easy target for anti-China groups to fan up religious and anti-China sentiment.

However, amid allegations against China, leaders from the Muslim world who have visited Xinjiang have not uttered disapproval. In fact, some Middle East nations even voiced support for Beijing’s treatment of the Uyghurs.

A 25-year strategic cooperation agreement signed on March 27 between China and Iran is seen as a stamp of confidence on China by a major Muslim country. The pact, signed at the height of the cotton conflict, covers military, trade, energy and economic cooperation. It has attracted Western media and eyes.

In countering the claim that Xinjiang cotton is tarnished by forced labour, China has questioned why its accusers have persistently refused to visit Xinjiang and do their own fact-finding.

In the past, Beijing has adopted a relatively passive response towards western accusations. Its rebuttals often came in the form of press statements and media interviews to show the good work they have done in Xinjiang, which include eradicating extreme poverty in this arid mountainous north-western province, setting up schools for the young, and creating employment for the jobless.

But this time around, China has dropped its soft approach. It has hit back mercilessly.

For politicians with wide-ranging commercial interest in China, it really hurts. One named person facing China’s sanctions saw his family fortune dwindle by US$1bil as businesses linked to him are hit, according to social media posts.

It is understandable that Beijing has to respond fast as these claims are hurting Xinjiang and undermining China’s economy. It has triggered boycott of Xinjiang cotton by Western brands led by H&M, Nike and Adidas – all members of the BCI.

According to China Daily, the boycott has had an instant impact on Xinjiang’s cotton/textile industry. Textile factories are planning to lay off workers and cutting purchase from local farmers due to cancelled orders.

The cotton/textile industry in Xinjiang has created jobs for 600,000 local people. More than 50% of farmers in Xinjiang grow cotton, with over 70% of these farmers coming from ethnic minority groups – the Uyghurs, Kazaks and Uzbeks, says the daily. According to commentators on China’s official CCTV television (Channel 4) last Sunday, cotton farming was introduced to help eradicate abject poverty. As the soil and climate is ideal for cotton farming, Xinjiang produces one of the best cotton crops (in terms of quality) in the world.

With an annual output of 5.2 million tonnes, Xinjiang’s cotton accounts for 87% of China’s output and 23% of world supplies. By end-2019, there were 808 cotton processing plants in Xinjiang, accounting for 84% of China’s total, says a report in Global Times.

These statistics show that cotton farming and textile manufacturing has become a mainstay of Xinjiang’s economy, apart from tourism.

If Xinjiang’s cotton is tarnished, this segment of Chinese economy will be affected. More so will be China’s efforts in poverty eradication, hailed by the World Bank as a great achievement.

Hence, it is no surprise China has had to roar back to stop further damage.

Arguing against the “forced labour” claim, the Global Times noted that over 90% of cotton fields in the northern part of Xinjiang is mechanised.

And interestingly, the cotton-picking machines of Xinjiang are imported from the US. John Deere of the US has sold US$500mil worth of cotton-harvesting equipment to Xinjiang since 2017, according to the South China Morning Post.

But the loss in this row is not just confined to China. Western brands that have dropped Xinjiang cotton are feeling backlash from the mainland’s consumers, who have called for a nationwide boycott by China’s 1.4 billion people.

Sweden’s garment company H&M, reported to have 505 sales outlets in China, saw its stores empty on March 25, shunned by local customers. It was reported that six stores have closed after landlords cancelled their leasing contracts.

As China is a major market for H&M in terms of revenue, H&M last Wednesday posted a statement on its website to defuse tension. It said without mentioning Xinjing: “We are dedicated to regaining the trust and confidence of our customers, colleagues, and business partners in China.” 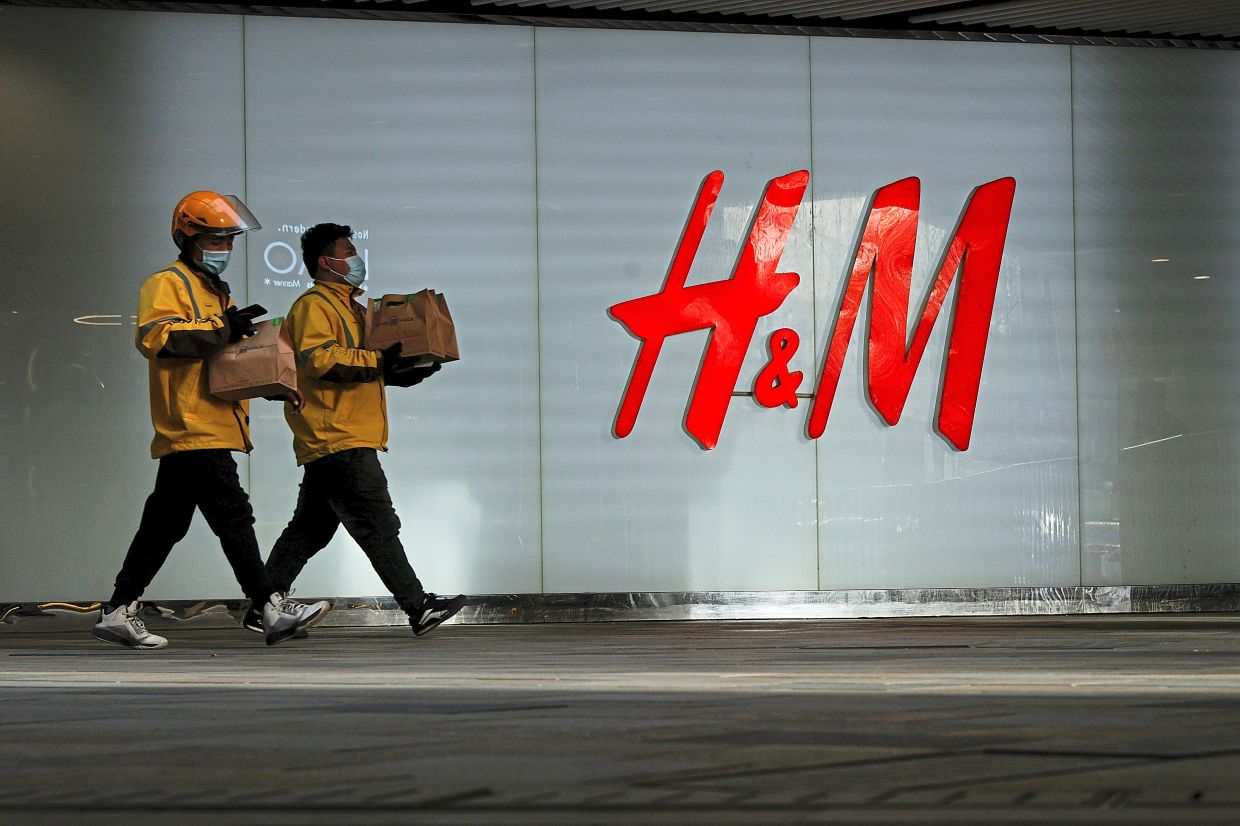 But Chinese netizens are not happy with this statement.

The Chinese sentiment is largely reflected by a post by China’s Communist Youth League: “Spreading rumours to boycott Xinjiang cotton, while trying to make a profit in China? Wishful thinking!”

More than 40 celebrities in the entertainment world have responded to call for boycott by quitting as brand ambassadors for foreign companies.

It was not a surprise when share price of some multinational companies plunged after the public outcry in China.

According to media reports, Germany’s Adidas saw its share price plunge by over 6% on March 25. Adidas and US-based Nike saw their combined market value dissipate by more than 70 billion yuan or US$10.7bil. The market value of H&M slumped by about 4.8bil yuan.

But if these multi-national corporations (MNC) want to continue to operate in China and earn billions from 400 million middle-class consumers, they may have to do soul-searching and research.

Zhang Yi, CEO of Shenzhen-based iiMedia Research, told Global Times these MNCs may find prospects and growth potential in the rapidly-expanding Chinese market dimmed, and their brand value could be reduced by half.

Before this cotton episode, many MNCs had rosy growth projections for 2021 in the Chinese market. For instance, Adidas was expecting 20%-30% growth in China in 2021, Zhang noted.

Apart from growth, MNCs could also face an irreversible loss in the world’s largest market. When an MNC loses its market share in China, another will promptly scramble in to fill the vaccum, according to Zhang.

However, not all MNCs are losers. Companies that have aired support for Xinjiang, such as Fila China and Muji China, are enjoying consumer support.

And California-based Skechers has won generous praise for having done its own fact-checking. The footwear firm has said its audits found no evidence its Chinese supplier had used “forced labour”.

Some Chinese brands have also emerged winners in this conflict as consumers turn nationalistic. These include Li Ning and Anta.

Globally, the losers are consumers.

Hence, consumers in EU, the US and Southeast Asia will have to pay more for products with Xinjiang cotton.

For China, this cotton row may be a wake-up call to review its international strategies.

Mei Xinyu, a researcher at the Chinese Academy of International Trade and Economic Cooperation, told Global Times Beijing might have to exert “a far greater say in the global cotton/textile industry and in the formulation of standards and pricing”.

And rightly so, as China is the world’s second biggest cotton producer and largest textile/apparel exporter. Last year, it sold US$291.22bil worth of cotton-linked products to the world.

As US President Joe Biden has declared he will not allow China to overtake the US during his term of office, China can expect to see more blows from the US to contain China and counter President Xi Jinping’s successful Belt and Road Initiative.

But as the Alaska talk last month shows, Beijing is prepared to stand up to the US and the West. It has declared it will not allow China to be bullied and humiliated by the West like 120 years ago.